Manchester United returned to winning ways on Wednesday night with a convincing 2-0 win over AFC Bournemouth to reignite spirits ahead of Saturday’s FA Cup semi-final clash with Tottenham Hotspur.

Jose Mourinho confirmed ahead of the game that Antonio Valencia and Nemanja Matic were both being rested for Saturday, adding after the win that Paul Pogba‘s performance had been enough to merit a place in the starting XI too.

The likes of Ander Herrera and Jesse Lingard also confirmed spots in the side as well with commanding performances.

With that in mind, here is a potential XI for the biggest game of United’s season at Wembley this weekend. 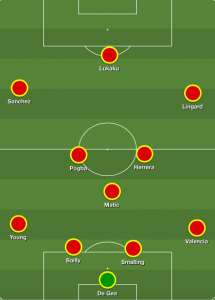 This is indeed the starting XI deployed by Mourinho at the Ethiad earlier this month, and the one he will be most inclined to trust in the face of Tottenham’s raw pace and strength through the middle.

Back at Wembley in January there was a miserable disconnect between midfield and attack, with the two man pivot of Pogba and Matic overwhelmed by a constant stream of onrushing white shirts. Having Herrera, who delivered a tenacious display on Wednesday, in a three man midfield ought to give Pogba the platform to interact with the likes of Alexis Sanchez and Lingard further forward whilst giving United’s midfield slightly more shape.

Games against Pochettino sides away from home have been consistently poor. United have always handed them the initiative and ultimately paid for it. They cannot afford to do the same in such a huge game.