Paul Pogba, Ander Herrera, Alexis Sanchez and Chris Smalling have all been handed a place in Garth Crooks’ BBC ‘Team of the Week’ following Manchester United’s 2-1 win over Tottenham Hotspur in the FA Cup semi-final.

Pogba and Alexis, who were threatened with expulsion from the starting XI following defeat to West Bromwich Albion, combined beautifully to draw Man United level midway through the second half and were the two brightest players going forward all game.

Herrera, on the other hand, was an unyieldingly tenacious presence in the middle, hassling Spurs players all game and plundering home the winner in the second half, while Smalling completely nullified the threat of Harry Kane up front.

The quartet have been duly rewarded for their decisive performances against Mauricio Pochettino’s side with a place in Crooks’ team of the week. 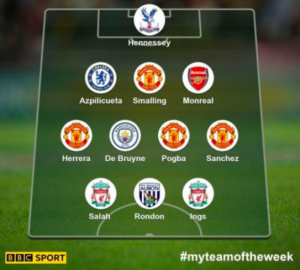 The Telegraph came out with a report soon after defeat to West Bromwich Albion claiming that Mourinho would leave out Pogba, Sanchez and Herrera for the FA Cup semi-final, such was his anger at what he had seen against the bottom side.

In reality, all three started and played a fundamental role in dismantling Spurs: Herrera the hustler, Pogba the architect, Alexis the finisher. It was a performance which, above all, reminded us of the need to take what you read about United during the week – especially after a defeat – with a big pinch of salt.