Manchester United cannot afford to make the same mistake made against West Bromich Albion when they welcome Arsenal – and Arsene Wenger for the last time – to Old Trafford this weekend.

Jose Mourinho had just recorded an historic 3-2 win over Manchester City, denying them the chance to wrap up the title, only to hand it to them on a platter by losing to bottom club West Bromwich Albion a week later.

And having just beaten Tottenham Hotspur to book a place in the FA Cup final, Man United simply cannot afford to lose their momentum once again.

With that in mind, here is a potential XI for the game against Arsenal on Sunday featuring Luke Shaw and Victor Lindelof. 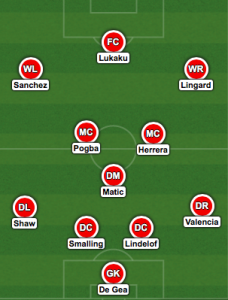 Jose Mourinho is unlikely to make many changes to the starting XI put out against Tottenham and Man City in the next four games as he looks to consolidate his attacking set-up and defensive structure. You wouldn’t be surprised if the midfield three and attacking trio were purposefully kept together.

But perhaps the clash with Wenger’s side – set to be significantly weaker than normal given the timing of this game in relation to their Europa League tie with Atletico Madrid – could provide an opportunity to defensive duo Luke Shaw and Victor Lindelof to impress the manager.

Shaw applied himself well against AFC Bournemouth, bombing up and down the flank with admirable thrust, and deserves another chance to present himself as a more mobile alternative to Ashley Young in games where the emphasis is more on United to attack.

Lindelof, on the other hand, featured in the 3-1 win at the Emirates in December and supporters will want to see him start his third successive game at Old Trafford.