Manchester United can all but guarantee a second place finish in the Premier League with a win over Arsenal on Sunday.

Jose Mourinho‘s men are four points ahead of Liverpool, whose attentions will now be firmly on the Champions League, with a game in hand.

Arsene Wenger, meanwhile, will no doubt rest key players on his last visit to Old Trafford as Arsenal boss ahead of his side’s Europa League semi-final second leg against Atletico Madrid.

With that in mind, here is a potential XI for the clash with Arsenal including Anthony Martial and Marcus Rashford. 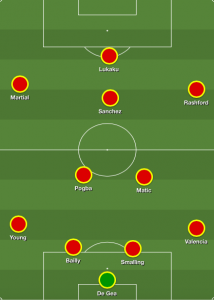 Arsenal are the only team in the top four divisions to lose every single league game away from home this calendar year and will, no doubt, have a starting XI littered with fringe players at Old Trafford.

In other words, that soft, flabby underbelly will be well and truly exposed, and United have to take advantage by hitting them with pace on each flank.

Mourinho is likely to allow the visitors plenty of possession, drawing them further forward until his front four, with Paul Pogba surging up the pitch as well, hit them hard on the break. It could be the perfect big game for Martial and Rashford, having failed to impose themselves over the last few months, to properly assert themselves.