Manchester United turned around a poor first-half performance to come out on fire after the break and beat Tottenham Hotspur in the Emirates FA Cup Semi-Finals 2-1 last Saturday.

The attack looked fluid thanks to the tireless work of wingers Alexis Sanchez and Jesse Lingard while the back four merged brilliantly with Nemanja Matic to maintain the lead given by Ander Herrera in the 62nd minute, who controlled the midfield without error alongside Paul Pogba.

After such a fine showing by the players at Wembley Stadium, as well as in the last Premier League outing against AFC Bournemouth in a 2-0 win, here is a potential XI for Sunday’s colossal contest with Arsenal at Old Trafford. 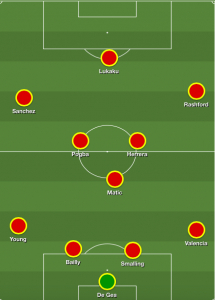 Expect minimal changes, and this is the exact same side that lined up at the weekend as United booked their place in a record 20th FA Cup Final apart from Eric Bailly, who missed out against Spurs due to illness, replacing Phil Jones to reattach what seems to be Jose Mourinho‘s preferred centre-back pairing.

Bailly is also the most likely centre-half at the club who will be able to keep up with the pace of Pierre-Emerick Aubameyang, who is odds-on to start on Sunday due to not being able to feature in Arsenal’s UEFA Europa League campaign, and will fit right in after impressing since his return from injury last month.

The United faithful are thriving on the chance to give Arsenal manager Arsene Wenger a worthy send-off at Old Trafford, with his previous misfortunes at the Theatre of Dreams in mind, and they might just get it if this line-up shows up like they did in the final 45 minutes a week ago.