Paul Pogba went straight over to Arsenal youngster Ainsley Maitland-Niles to congratulate him on his performance and dispense some words of wisdom following Manchester United’s 2-1 win over Arsene Wenger’s side on Sunday.

The 20-year-old had performed impressively in the middle of the park, handling the ball with maturity beyond his years and bringing impetus through the middle.

His opposite number had put Man United ahead early on, only for Henrikh Mkhitaryan to equalise in a mundane second half which saw Marouane Fellaini head home a stoppage time winner.

And Pogba, instead of celebrating at the full time whistle, immediately went over to Maitland-Niles, who was handed the ‘Man of the Match’ award by Sky Sports. 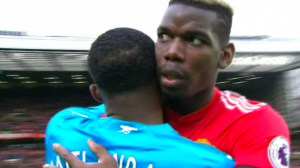 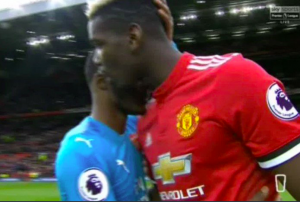 Maitland-Niles typified a plucky, energetic Arsenal performance – albeit without any bite aside from Mkhitaryan’s precise strike – more than any other player on the pitch. He was, along with other youngsters like Reiss Nelson and Konstantinos Mavropanos, making the most of the occasion, which was more about what was happening off the pitch than on it.

The game as a result took up a strange dynamic: bumbling along rather than motoring, with United ambling around the pitch – their focus firmly on May 19 – against a well drilled group of youngsters and fringe players, until forced into action during the last ten minutes or so.

Those Roy Keane and Patrick Viera days could not have felt further away.