Manchester United will all but seal a second placed finish in the Premier League this season and remain on track to claim 86 points with a win over Brighton and Hove Albion on Friday night.

Jose Mourinho‘s men confirmed their place in next season’s Champions League with a 2-1 win over Arsenal last weekend but will want to ensure they finish as ‘best of the rest’ after 38 games.

The 55-year-old will likewise want to keep some of his players fresh ahead of the FA Cup final against Chelsea on May 19.

With that in mind, here is a potential XI for the clash on the coast with Anthony Martial replacing the injured Romelu Lukaku up front, while Ander Herrera, Jesse Lingard, Ashley Young and Antonio Valencia all receive rests. 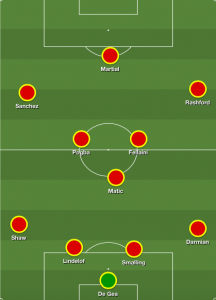 Mourinho regards Lukaku as an indispensable member of his starting XI, describing the Belgian as his “sergeant on the pitch” earlier this year, which means both Marcus Rashford and Martial don’t have the chance to feature in the positions that propelled them to stardom at this club in the first place.

But with Lukaku out injured, Mourinho will give one of them a chance. Rashford performed diligently in that role against AFC Bournemouth and now, you sense, it is time for Martial, having impressed with his direct approach off the bench against Arsenal, to receive the chance to do the same against Chris Hughton’s side.