Home » West Ham United vs Manchester United: Potential XI with three at the back

West Ham United vs Manchester United: Potential XI with three at the back

Jose Mourinho will demand a reaction from his players following Friday’s woeful 1-0 defeat at the hands of Brighton and Hove Albion – especially from Anthony Martial and Marcus Rashford.

The pair, along with the ineffective Juan Mata, failed to click as a front three and Mourinho stated after the game that the performance explained why they didn’t start ahead of Romelu Lukaku.

Thursday’s visit to West Ham United, who secured their Premier League safety over the weekend, presents an opportunity for the pair to prove their boss wrong. 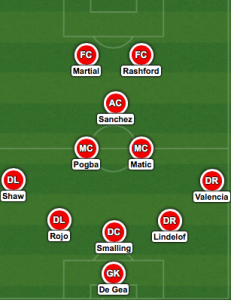 United had a front three in force at Brighton but never once did it look unified or dynamic at all, operating at a snails pace and failing to generate any actual space in behind. The whole thing was just flat from start to finish.

Perhaps Mourinho, in response, will opt for his occasionally used tactic of matching the opposing team’s formation, trusting the ability of his players to have too much quality on the ball.

Specifically, he will want to see Alexis Sanchez acting as a springboard for more direct attacks down the middle, opening up space for Martial and Rashford in behind.