Manchester United can confirm a second placed Premier League finish with a point away to West Ham United on Friday night.

Jose Mourinho is likely to field a weakened team ahead of the clash with Watford at Old Trafford on Sunday.

Romelu Lukaku continues to recover from an ankle injury, which provides Anthony Martial and Marcus Rashford with another chance to impress despite suffering criticism from their boss in the aftermath.

With that in mind, here is a potential XI featuring Martial starting the game in the No.9, with Rashford possibly coming on later in the game to stretch West Ham’s ageing defence. 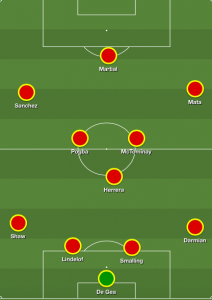 Rashford’s stock at No.9 further diminished during the 1-0 defeat to Brighton and Hove Albion. Mourinho notably took the 20-year-old off against Derby County in the FA Cup because he felt like he wouldn’t score, and you cannot help but feel as if he’ll opt for something different at the Olympic Stadium.

And it presents the chance for Martial to demonstrate the attacking verve he has shown on his limited starts in that role – most recently during a 2-0 win over Everton.

Reports have claimed that Mourinho wants to offer Martial more opportunities down the centre next season. Thursday night serves as a chance for the Frenchman to lay down a blueprint for what he can do when handed more opportunities in front of goal.