Manchester United will be looking to finish a solid Premier League campaign off with a win as they host Watford at Old Trafford on the final day of the season this Sunday.

Second place was secured against West Ham United on Thursday night after a flat performance saw the game finish 0-0 to confirm their highest league finish since they won the title in Sir Alex Ferguson‘s final season in 2012-13.

Jose Mourinho revealed after full-time that he’ll be making changes to his starting line-up now that there’s nothing to play for in the league and with the FA Cup Final against Chelsea lurking over the horizon.

Star striker Romelu Lukaku will not feature as he continues to recover from an ankle injury suffered against Arsenal at the end of April and Mourinho has already mentioned a few names who will start on the field.

Sergio Romero is set to start just his seventh Premier League match in three seasons, replacing 2017-18 Golden Glove winner David de Gea, and Michael Carrick will start his final match for the club ahead of retirement this summer to become a part of the coaching staff at Old Trafford.

A number of other names are bound to be reintroduced to the side and here is a potential XI including Romero between the sticks and Carrick captaining United from the heart of midfield. 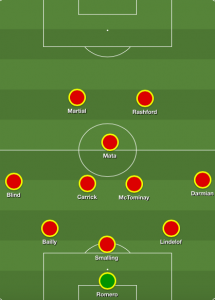 United were working the ball out from the back well in the capital on Thursday and that was mainly down to the three-at-the-back system being used, so it’s likely that will stay put with Matteo Darmian and Daley Blind replacing Antonio Valencia and Luke Shaw as full-backs.

However, it would not be a surprise to see Shaw start after what many thought was a promising performance last time out. Scott McTominay should keep his place to offer Paul Pogba, Ander Herrera and Nemanja Matic a rest ahead of next weekend’s colossal fixture.

Finally; Juan Mata, Marcus Rashford and Anthony Martial should have a chance to redeem themselves after their calamitous display in the defeat at Brighton & Hove Albion saw all three of them benched at West Ham. It needs to be Martial down the middle this time around though, not Rashford.