Romelu Lukaku returned to Carrington on Tuesday for the first time since picking up an ankle injury against Arsenal last month.

He has spent some time in Belgium working with specialists to recover in time for the FA Cup final and, with four days to prepare, supporters will be hopeful of seeing their striker start against Chelsea.

But Mourinho has been more cautious, suggesting last week that Lukaku may only be fit for a place on the bench. The prospect of United’s star striker missing the biggest game of the season is, unfortunately, very real.

With that notion in mind, here is a potential XI for the FA Cup final without Lukaku in the side. 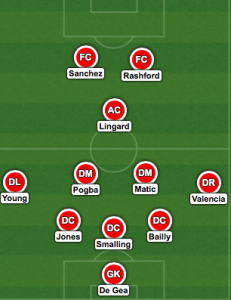 Ever since Lukaku came off against Arsenal there has been a certain flatness to United’s play. Mourinho would have realised that playing the same system used for Lukaku, only without him on the pitch, does not yield much joy at all.

And this is why he will need to switch up the formation should his ‘sergeant’ miss out. United benefited during last season’s 2-0 win over Chelsea from having two agile, energetic strikers up top, putting pressure on centre backs before they can release the ball to Cesc Fabregas or Eden Hazard.

They cannot afford to be ponderous. Mourinho will rely on his team to absorb pressure and then hit Antonio Conte’s men quickly on the break, moving the ball past N’Golo Kante as rapidly as possible and putting pressure on Chelsea’s mercurial back three.