David de Gea and Ashley Young have been handed places in Garth Crooks’ BBC ‘Team of the Season’.

The Spaniard has been head and shoulders above any keeper this season, claiming 22 clean sheets from 44 games in all competitions and winning the ‘Golden Glove’ award for the first time.

Young, on the other hand, has emerged as a surprise regular in Mourinho’s team since returning from an injury in late September, making 30 league appearances in total.

The pair have both been handed places in Crooks’ ‘Team of the Season’ following consistently solid displays throughout the 2017/18 campaign. 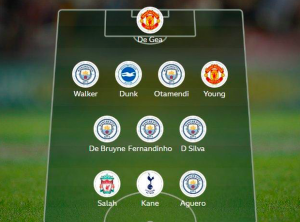 De Gea being there is simply a no brainer. He is a man of natural excellence, ice running through his veins, the Roger Federer of goalkeeping. The footballing world, unsurprisingly, is arriving at the consensus that the Spaniard is the best in the world at his trade.

Young, on the other hand, has earned his spot in a different way: through pure graft. He is not a breezy player, so to speak, but rather one with the right attitude and the mettle to show up every week, even if his technical capacity can let him down.

It is why Mourinho has continued to play him throughout the season and stated last week that he wanted to see the Englishman play 50 games next year.