Manchester United are interested in securing the services of Chelsea forward Willian in the summer and the Brazilian is keen to leave Stamford Bridge if Antonio Conte remains manager, according to sources at Sky Sports.

Jose Mourinho brought Willian to Chelsea back in 2013 and has spoken effusively of the Brazilian in recent times.

Speculation of a move away for Willian only intensified when he posted an Instagram story of the Chelsea team celebrating winning the FA Cup with Antonio Conte, with whom he has a strained relationship, cropped out by a series of emojis. 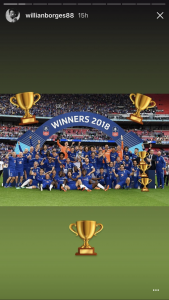 And according to Sky Sports, Man United are very keen to land Willian’s signature and the 29-year-old, who was left on the bench for the FA Cup final, wants to find a new club this summer.

Mourinho’s interest in Willian falls directly in line with the Portuguese’s acquisition of Alexis Sanchez – another staccato style, technically astute workhorses out wide – back in January, and along with Jesse Lingard it provides a clear impression of what the manager wants to see from his attacking midfielders.

Most supporters would be happy with seeing Willian fill the ever-changing role on the right hand side, but not if it came at the expense of Anthony Martial departing the club – especially if his next destination turned out to be Chelsea.