Chelsea forward Willian has fueled speculation regarding a summer move to Manchester United after posting an indirect swipe at manager Antonio Conte on social media.

Willian has been one of Chelsea’s stand-out players in what has been a lacklustre season where the club missed out on UEFA Champions League qualification, however, won the Emirates FA Cup by beating Man United 1-0 in Saturday’s Wembley final.

Despite Willian’s fine contribution in a poor campaign, a reported rift between himself and boss Conte has seen him been left out in the cold, which has sparked rumours of a reunion with old boss Jose Mourinho.

The Brazilian has started just one match since Chelsea defeated Southampton in the FA Cup semi-final in April and was seen storming straight down the tunnel after being substituted in that meeting.

After full-time, Willian posted an image of the team lifting the FA Cup trophy with ‘trophy emojis’ on the screen. Three of which completely, and blatantly, covered Conte in the image. 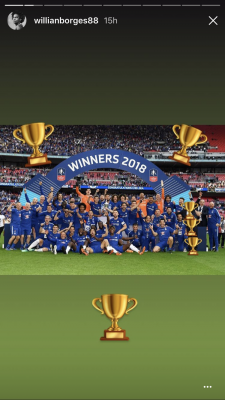 This came after coming on in the 89th minute and barely touched the ball in Chelsea’s final triumph against United, and was later seen leaving the area in the back of a car whilst his team-mates were still celebrating in the stadium.

Only time will tell whether Willian will switch allegiances in the close-season but with a rumoured swap deal involving Anthony Martial in Mourinho’s plans, we could be seeing him join Alexis Sanchez and Romelu Lukaku in the front line for the 2018-19 season.