Luke Shaw has continued to rigorously put himself through the paces ahead of Manchester United’s pre-season tour, which starts on Sunday.

The Englishman endured another tough season under Jose Mourinho, who once again publicly chastised the youngster and – aside from a period in December and early January – left him on the periphery of his first team plans.

Many expected Shaw to leave the club but he has resolved to fight for his future at Old Trafford amid a torrent of abuse which followed the release of tabloid photos of him looking slightly overweight on holiday.

And with pre-season training officially kicking off on Monday, Shaw has once again taken to social media to show he is putting in the hard yards at home ahead of rejoining the Manchester United squad. 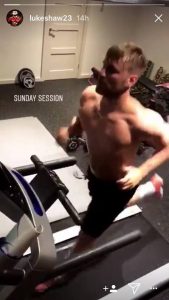