The World Cup is over after almost five weeks of pure entertainment, and eyes will now quickly turn to the familiar ebb of Premier League football, which kicks off in just 25 days.

A number of key players, however, will not appear for Manchester United until a few weeks into the 2018/19 campaign, giving Jose Mourinho a selection headache for opening day clash with Leicester City.

With that in mind, here is how Man United will line up against Leicester – who will be without Jamie Vardy and Harry Maguire – on August 10. 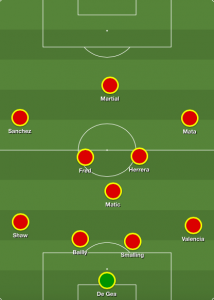 David de Gea, Nemanja Matic and Marcos Rojo left Russia at either the group stage or last 16, meaning their three week break ends during this week, giving them almost another three weeks to get back in shape for the Leicester clash.

Fred, on the other hand, reached the quarter-final, which rules him out of most of pre-season, but you suspect Mourinho will want him starting against Leicester in the guaranteed absence of Paul Pogba. The Brazilian will have just under two weeks of training under his belt by the time Leicester comes around but, unlike Pogba and Marouane Fellaini, he didn’t play a single minute at the finals, and should be fresher as a result.

Marcus Rashford, Jesse Lingard, Phil Jones and Ashley Young will be unavailable after their remarkable journey with England. The same goes for Fellaini and Romelu Lukaku. Victor Lindelof will also have an extended break following an impressive run with Sweden.

That will leave United light in some areas, but it provides the opportunity to the likes of Anthony Martial and Luke Shaw to make an early impression on the boss following difficult campaigns last year.