Home » Paul Pogba: I like all the midfield positions

Manchester United star Paul Pogba has revealed he likes to play in all of the midfield positions during an Instagram Q&A.

Much has been made of the Frenchman’s position and how to get the best out of him with even Jose Mourinho being roped into the discussion.

The Portuguese manager is known for favouring the 4-2-3-1 formation but appears to have tweaked it this season in order to build his side around Pogba.

The former Juventus man is said to be at his best as part of a midfield three in a 4-3-3 formation as it completely unshackles him from defensive responsibility.

Some even claimed Paul had demanded to be played in that tactic and that’s eventually why Mourinho invested in Shakhtar Donetsk’s Fred. 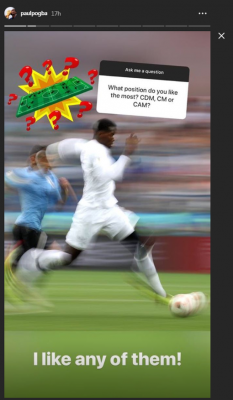 Either way, where a player likes to play and where he actually plays best are two separate things so it seems Jose believes Pogba’s best in a 4-3-3.

There’s no doubt the former Chelsea manager invested so heavily in the midfielder at the start of his reign as he intended to build his side around the player.

He attempted to do so in a 4-2-3-1 shape and it hasn’t worked so far meaning he’s been forced to adjust to accommodate his key player.