Paul Pogba opted against colouring his hair during the World Cup in order to force his critics to focus on his performances and nothing else.

The Frenchman’s penchant for dyeing his hair has, for some reason, incensed a number of critics – mainly those from the, ahem, older generation – during his time at Manchester United, most notably ahead of his match winning performance at the Ethiad during which he played with sky blue hair.

At the World Cup, however, he stayed loyal to keeping his hair away from any colourants as France, bolstered by his leadership and sensational midfield performances, rampaged to glory in Russia.

Pogba, amid a Q&A session on his Instagram story, remarked that he intentionally left his hair colourless to ensure critics focused on his performances. 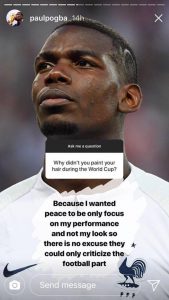 The image of a young, rich, black, successful Muslim with dyed hair is enough to make your average Graeme Souness type explode in a fit of diabolical rage. Many critics, upon seeing Pogba’s barnet and demeanour, harbour a kind of antipathy towards him before a ball is kicked – the dye already cast, so to speak (sorry).

At the World Cup, as Pogba explains, they were forced to focus on what he was doing with the ball at his feet, and what they saw was nothing short of world class.

He grew as the tournament went on, his presence more commanding, and ended up scoring the winner in the World Cup final, cementing himself in sporting history and the hearts of French people forever. No haircut can ever change that.