Jose Mourinho has revealed he more or less knows the starting XI which will feature against Leicester City on August 10.

The Portuguese has had to negotiate pre-season with severely limited options due to ten players being away on holiday following the World Cup, with seven of those players going right into the last week of the finals, ruling them out for the Leicester clash and indeed for most of August.

Speaking in an interview ahead of the club’s pre-season clash with Real Madrid, Mourinho noted he had a strong idea of what starting XI he would put out against Leicester.

“More or less I know. It’s not going to be very different,” he said. “We have basically the same players – the players that we bought.”

“One is a goalkeeper cover another is a 19-year-old kid. In fact, we have one new player, which is Fred, so of course our team is not going to be very different.”

It will be a truly strange starting XI we see against Leicester. It will not be the team Mourinho wants to play with throughout the season. Thankfully, though, it will not be anywhere near as bad as United’s last post-World Cup line-up for its opening game. See below. 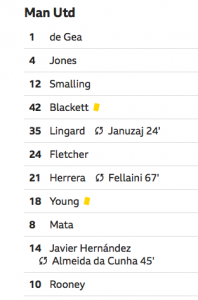 And so will August 9, but the team will, all things considered, be one supporters are more familiar with. David de Gea, thanks to Spain being awful at the World Cup, will thankfully return between the sticks. Chris Smalling and Eric Bailly will start as central defenders against a Leicester side without Jamie Vardy. Valencia and Luke Shaw, despite doubts over the former’s fitness, should be the full-backs.

The midfield, by the looks of things, will have Ander Herrera at the base of midfield (although let’s not rule out Scott McTominay starting), with Fred and the impressive Andreas Pereira.

For the front three Mourinho has declared he envisaged Juan Mata, Alexis Sanchez and Anthony Martial to start against Leicester. Whether the latter will be part of the squad by then is a big doubt.