Manchester United take on Real Madrid on Tuesday night for the final game of the club’s tumultuous pre-season tour of the United States.

Jose Mourinho remains without a large portion of first team players as they continue their holidays after the World Cup. Antonio Valencia, Eric Bailly, Nemanja Matic and Diogo Dalot are all injured as well.

No further signings have been added to the squad since Man United landed in Los Angeles on July 15, but the arrival of Fred and David de Gea to the club’s tour has served as an important boost for Mourinho’s ailing mood.

With that in mind, here is how United could line up against the European champions in Miami with the pair starting their first game of pre-season. 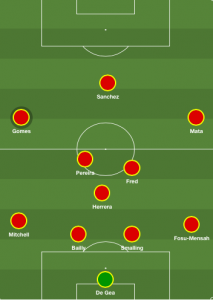 Andreas Pereira once again impressed but the pairing of Ander Herrera and Scott McTominay further behind was insipid, sucking any forward momentum out of United’s play.

The injection of Fred alongside Pereira, therefore, coupled with a change in formation to give the side more width, could go some way towards addressing what was an embarrassing team performance from United against Jurgen Klopp’s side.