Manchester United’s slip in form during May which left them without silverware notably coincided with an injury to Romelu Lukaku.

The Belgian, who scored 27 goals last term, came off during a 2-1 win over Arsenal in May and only managed to recover in time for a substitute appearance in the FA Cup final, which Man United lost primarily because of failing to have a presence up front.

United won against Leicester City in their first game of the Premier League season last Friday but nonetheless struggled to pose a constant threat going forward in the absence of Lukaku.

With that in mind, here is how Jose Mourinho can line up when his side travels to Brighton and Hove Albion next Sunday. 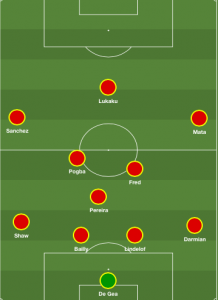 Last season’s trip to the Brighton seaside was a prime example of United’s toothlessness going forward without the Belgian. Most of the club’s pre-season, which saw Alexis Sanchez play up front with mixed results, served as a nod to this deficiency as well.

Mourinho knows this well enough. He even mentioned Lukaku in his reasoning behind why United lost to Brighton last season. And he will no doubt want the striker, who scored in a 2-0 win over Brighton in March, leading the line against a notoriously solid Brighton defence following over a week of training at Carrington.