The 55-year-old has lost consecutive league games against Brighton and Hove Albion and Tottenham Hotspur, conceding six goals in the process.

A third defeat to Burnley would, you suspect, force Ed Woodward and the club’s board to start thinking seriously about his position.

With that in mind, here is how Mourinho could line up for the visit to Burnley, with Marcos Rojo joining the back three after recovering from injury. 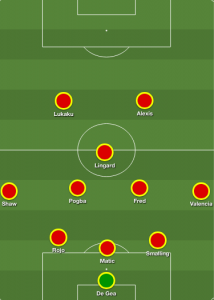 United played their best football with a back three against Spurs – albeit losing their firmness in the second half – and would be wise, and brave, to adopt a similar set-up at Turf Moor.

They set up in the same way for their 1-0 win over Sean Dyche’s men – who only have one point so far this season and will be coming off the back of a big Europa League qualifier this weekend – and it helped them control the game.

The key to stopping Burnley at home is, firstly, avoiding silly mistakes at the back and controlling the ball high up the pitch, preventing the hosts from making meaningful counter-attacks.

Mourinho will hope his back three, with Nemanja Matic at the base, can keep things calm, and afford Paul Pogba the chance to link up with Jesse Lingard and attacking pair Romelu Lukaku and Alexis Sanchez to give United a desperately needed win.