The 55-year-old finds himself under enormous pressure having lost consecutive Premier League games to Brighton and Hove Albion and Tottenham Hotspur.

And some reports have even claimed that defeat to Burnley would culminate in the manager being sacked from the club.

He was spotted with the club’s opposition scout, docked in his trademark cap to stay incognito, as Burnley wasted a series of chances and ultimately drew 1-1 with the Greek side, losing 4-2 on aggregate. 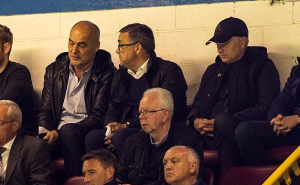 Speaking at a press conference on Friday, Mourinho insisted Burnley were unlucky to go out and made a point of how Dyche rested a number of key players for the meeting with United on Sunday afternoon.

“I think (unlucky to go out),” he said. “I went there and knew that they would rest a lot of the players that are going to play on Sunday, which happens.”

“I was not surprised by that, I went with the intention to see which direction they go, if Sean was trying to change or stick with the same principles that made them successful in the last couple of seasons and they were very unlucky