Romelu Lukaku has earned a place in Garth Crooks’ BBC ‘Team of the Week’ following his brace during Manchester United’s win over Burnley at Turf Moor.

The Belgian, who stormed Burnley’s back-line ruthlessly all afternoon, put the visitors ahead with a pinpoint header from Alexis Sanchez’s cross.

He was the quickest to react to a series of rebounds in the box to add a second for Man United on the stroke of half time.

And Crooks has duly named the Belgian, now with 30 United goals, in his BBC ‘Team of the Week’ alongside Alexandre Lacazette and Sadio Mane. 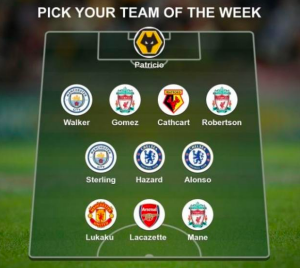 Lukaku achieved the milestone yesterday of equalling Didier Drogba’s total of 104 Premier League in 32 fewer games. He is still just 25, which is pretty incredible if you think about it.

And he could have had more against Burnley. Twice he was denied by Joe Hart in a one-on-one situation, and once he rounded the former Manchester City keeper only to be toppled by Ben Mee. It was a clear penalty.

But what mattered most was the relentlessness with which he bombed forward, ripping through the heart of Burnley’s defence time and time again. After a underwhelming couple of games against Brighton and Tottenham Hotspur, he can build on what he managed against Sean Dyche’s side.