Home » Photos: Paul Pogba joins up with France for the first time since World Cup triumph

Photos: Paul Pogba joins up with France for the first time since World Cup triumph

Paul Pogba has returned to France’s training camp in Clairefontaine for the first time since winning the World Cup.

The Frenchman, following a season of constant criticism back in England, silenced every critic with a superb run of performances in Russia, improving as Didier Deschamps’ men went deeper into the tournament.

He scored France’s first goal of the tournament against Australia, dazzled in knockout wins over Argentina and Belgium, and scored the winner in the final.

Pogba was obviously pleased to see that another star had been added to the club’s velvet entrance as he embarked on the team hotel ahead of clashes with Germany and the Netherlands this week. 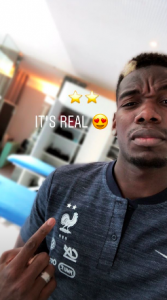