Home » United’s Week in Review: Jose Mourinho comes out fighting and Man United fans are behind him

United’s Week in Review: Jose Mourinho comes out fighting and Man United fans are behind him

A week after the humiliating downfall at Old Trafford against Tottenham Hotspur, it’s safe to say it hasn’t been the easiest week for Manchester United supporters, with Jose Mourinho and the board at the centre of heavy scrutiny from the media.

The 3-0 defeat to Mauricio Pochettino’s men was considered both woeful and wasteful, with United missing a number of opportunities in a commanding first half display that should’ve wrapped up the game. Along with a handful of defensive errors, Mourinho’s side were criticised for crumbling in the second half after Harry Kane glanced a header into David De Gea‘s top left-hand corner.

But it was what happened after full-time that took a lot of headlines as well. Mourinho walked in front of the remaining fans in the Stretford End and applauded them for staying right until the final whistle. They responded by cheering his name and clapping back, offering a little insight into the feelings of the fans.

Speculation of unrest in the dressing room spiralled right after the match, leaving some fans in a so-called ‘purgatory’ not knowing what was best for the club, a change in manager or a change upstairs in the board. It’s fair to say that Mourinho hasn’t helped himself either. When quizzed about still holding the prestigious title of ‘The Special One’ he demanded ‘respect, respect, respect’ from journalists, noting his three Premier League titles is more than the other division’s bosses combined. 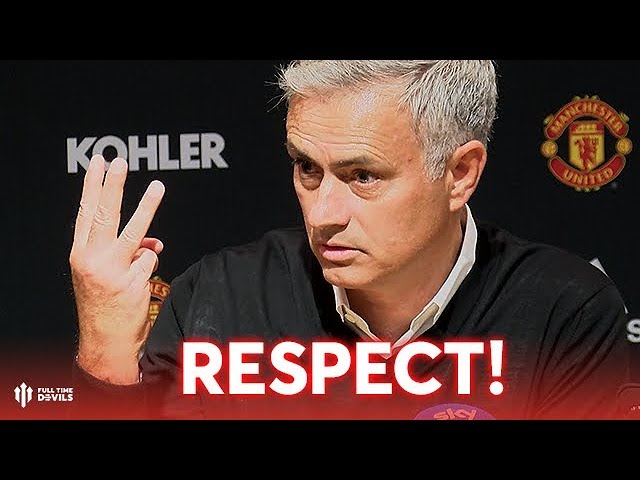 With talk mounting, the pressure cooker was turning up on Mourinho but many sources close to the club came out and claimed the rapport between the manager and Ed Woodward was still close, with the CEO confident Jose could turn around United’s worst start to a season since 1992.

Friday’s pre-match press conference saw a defiant Mourinho battling against the war of the words, defending his record by issuing a reminder of the eight league titles he won across spells at Real Madrid, Inter Milan and Chelsea. Furthermore, he drew reference to philosopher Georg Wilhelm Friedrich Hegel.

“Did you read any philosopher or in your formation you never spent time reading, for example, Hegel?,” Mourinho asked one reporter.

Mourinho’s mood was intransigent. He was ruthless. Yet, he had a fighting spirit which was certainly an attribute that worked in his favour as to why some United fans wanted him as manager. This helped silence parts of the media, claiming he was still ‘one of the greatest managers in the world’ whilst also battling against opposing fans jeering ‘you’re not special anymore’. After that press conference, you could argue he is still special in his handling of the current situation.

More evidence occurred of Mourinho’s reign being far from over in United’s 2-0 win at Turf Moor against Burnley.

A brace from striker Romelu Lukaku helped ensure the three points were safely secured, leaving United in the top half of the table just before the international break. It was an important win for a variety of reasons; ranging from the pressure cooker cooling on the manager to instilling confidence in a squad full of talent and prosperity.

Luke Shaw once again proved to the world why he is developing into a top class left-back. Alexis Sanchez, Jesse Lingard and Marouane Fellaini also produced impressive performances leaving fans somewhat assured after a strong all-round display from the team, despite missing a penalty and going down to ten men.

Not only have United created more chances in front of goal but they seem more willing to take the extra risk and claim responsibility. Mourinho would have worked on this but we cannot underestimate the impact of the latest arrivals on the coaching staff Kieran McKenna and Michael Carrick. Both seem to have assisted Mourinho in changing from a conservative to attacking approach.

Certainly, this transition would have been less likely if Rui Faria was still his left hand man. Carrick has the experience of working under Britain’s most successful manager in Sir Alex Ferguson, whilst McKenna has traditionally played with an aggressive style when coaching the U18s.

With Mourinho once again standing in front of the applauding fans after the victory against Burnley, it’s visible to everyone this is a man who isn’t going to give up anytime soon, and if the exciting displays continue against Watford and Wolves, United are most definitely not dead and buried in the water this season. The evidence is there to suggest the tide is turning for the team. It’s now time to see what happens in the next chapter. Over to you, Jose.