Aiden, who received Jose Mourinho‘s jacket after the win over Burnley, has described the experience as a “dream come true”.

The 55-year-old made a point of how support from Manchester United fans after the 3-0 defeat to Tottenham Hotspur has helped his team bounce back positively.

He went to the away end, who had been chanting his name all game, at full time to give away a water bottle and his jacket.

And here is a photo of the lucky recipient, wearing the jacket with pride and looking like an absolute badman with his mates walking down the street in the oversized black leather jacket. 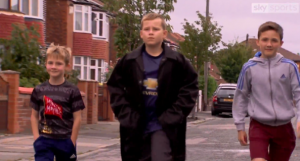 “I was amazed because it was like a dream come true to actually get someone’s thing because I love United,” he told Sky Sports.

“I’m going to get it in a glass frame and put it above my bed and just remember it. I’ve got the tickets as well so I’m going to put that next to it and I’m never going to sell it. I’m just going to keep it.”

United’s core support recognises how how Mourinho values them at such a turbulent time. The result, a convincing 2-0 win, was the most important thing but the way supporters united behind their manager served as a perfect response to a tumultuous couple of weeks.