Luke Shaw has been pictured training with the England squad at St George’s Park after earning a recall by Gareth Southgate last week.

The 23-year-old has been the club’s outstanding performer during the early stages of the campaign, deservedly winning Manchester United’s ‘Player of the Month’ award for August.

Shaw will have the chance to impress for his country in games against Spain and Switzerland, against whom he made his last international start all the way back in 2015.

Here he is alongside the rest of his England teammates, who came together yesterday for the first time since the World Cup in Russia. 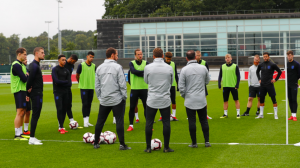 Man United have not had the perfect start this season but Shaw certainly has. Ever since he went to Dubai for a week with the club’s fitness at the height of its summer, with temperatures exceeding 40 degrees celsius and other players still on holiday, you could tell he meant business. You could tell this season could be different.

And it really has been. Shaw is playing with a sense of energy and composure we haven’t seen since he broke his leg in Eindhoven. Mourinho did not dispense with him for a reason: a proper pre-season and a good run of games was all he needed to get back to his blistering best. Long may it continue.