Marouane Fellaini was the first player to be mentioned by Jose Mourinho following his team’s convincing performance against Burnley prior to the international break.

It had been the Belgian’s first start of the season, replacing new signing Fred, and his discipline in the middle, to go with his enormous physical presence, helped Manchester United dominate the midfield battle at Turf Moor.

Mourinho may well want to use him once more against a Watford side which has taken maximum points so far this season and have looked dangerous from set-pieces.

With that in mind, here is how Man United could line-up at Vicarage Road, with new signing Diogo Dalot also coming into the starting XI. 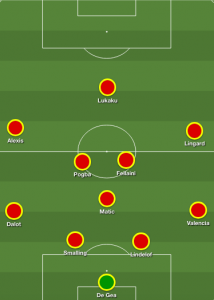 Fred has performed reasonably well during the nascent stages of his United career but he will, like Gilberto Silva noted this week, need time to properly acclimatise. Mourinho needs to pick and choose the games he plays in. Fabinho, Liverpool’s own Brazilian midfield signing, is yet to play a game yet as Jurgen Klopp seeks to ease him in.

And perhaps this game against an in-form Watford side away from home, with the pressure still firmly on United, would be better suited for the rambunctious physicality of Fellaini rather than the technical precision of Fred.