Fellaini, starting ahead of Fred for the second game in a row, delivered another stellar midfield performance against a physical side in a game which saw Lukaku claim his fourth goal of the season and earn praise from Jose Mourinho for his indefatigable attitude.

De Gea, meanwhile, kept Man United in the game with a superb save from Troy Deeney after 30 minutes before producing a last gasp diving effort from Christian Kabasele to guarantee the three points.

The trio have been duly handed a place in Crooks’ ‘Team of the Week’ following crucial displays. 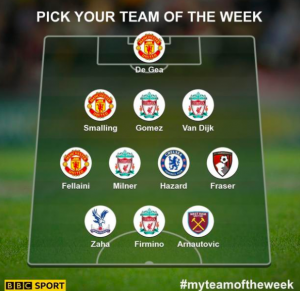 Perhaps we should not be too surprised at the sight of Lukaku scoring goals and De Gea making saves. The pair are among the best in the division in those respective positions.

What grabbed the attention on Saturday was the way Mourinho had found an almost ideal role for Fellaini: an extra man in defence when needed, giving other midfielders and attackers more freedom going forward, whilst also operating in the final third, bringing down long balls with total ease.

Used poorly, Fellaini only serves to frustrate and hamper. Used properly, however, and he can be a nightmare for opponents.