Manchester United return to Old Trafford on Saturday for the first time since losing 3-0 to Tottenham Hotspur almost a month ago.

Supporters would have felt a gloomy sense of foreboding as they left the ground after that performance but three away wins on the bounce have served to detoxify the atmosphere around the club.

Jose Mourinho confirmed in his press conference earlier today that Ander Herrera and Marcos Rojo, along with the suspended pair of Marcus Rashford and Nemanja Matic, were the only players unavailable for the clash with Wolverhampton Wanderers.

With that in mind, here is how the 55-year-old could line up against last season’s Championship winners. 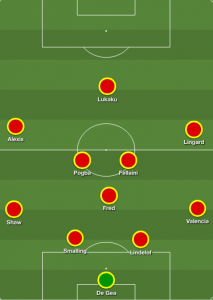 With neither Matic nor Herrera available on Saturday, Mourinho is likely to bring Marouane Fellaini back into the starting XI having impressed in wins over Burnley and Watford. He was used more defensively in those games but, against a less physical Wolves side, he will be likely employed as a battering ram further forward to disrupt Wolves’ low-block.

Fred, therefore, will need to hang back and play the Matic role, making interceptions and feeding the ball forward.

Alexis Sanchez and Jesse Lingard will likely return to the starting XI after receiving rests during the week. The former, following Anthony Martial‘s blinding second half at Young Boys, will have a point to prove.