Manchester United captain Antonio Valencia has apologised for liking an Instagram post calling for the sacking of Jose Mourinho, insisting he did not initially see what the caption said.

The club continued to plumb new depths of misery under Jose Mourinho with a nervy, deflated 0-0 draw against Valencia in the Champions League at Old Trafford.

There was, predictably, a massive uproar in the wake of another flimsy performance and Valencia, habitually a quiet individual, even got involved by liking a post – which was originally in Spanish – very clearly calling for the sacking of Mourinho. 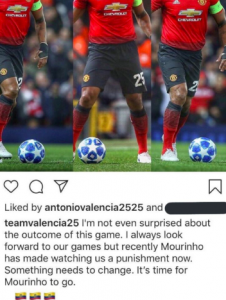 Valencia, or rather his PR team, confirmed this morning that he did not read the post before liking it, insisting he was fully behind the manager.

Yesterday, I liked a post on Instagram without reading the text that accompanied the picture. These are not my views and I apologise for this. I am fully supportive of the manager and my teammates. We are all giving our everything to improve the results. pic.twitter.com/bMEsrAwMkh

Whether or not Valencia was indeed aware of what the caption said is beside the point. Because regardless of the captain’s intentions, what this entire episode does – more than anything – is further highlight the sheer chaos developing at Man United at this difficult time. The club is a circus at the moment; the whole world is laughing at United.

As people often say: when it rains, it pours. That is especially true for United, a club in total turmoil.