Manchester United’s situation is becoming exponentially worse under Jose Mourinho and will not change course any time soon.

Tuesday’s 0-0 draw with Valencia, which followed an awful defeat at West Ham United over the weekend, underlined the notion that this team, although still prepared to fight, has lost all confidence and ability under the current leadership.

So many players – big names like Romelu Lukaku and Alexis Sanchez – look like shells of their former selves as the club enters new depths of turmoil.

Mourinho, therefore, needs to make some serious changes to his starting XI against Newcastle United this weekend. 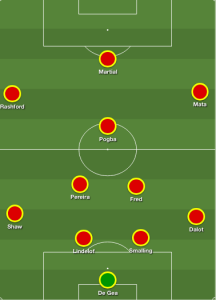 Lukaku, having scored against Burnley and Watford, has entered something of a slump. His performance against Valencia was riddled with uncertainty. That he has no other striker breathing down his neck, forcing him to work that extra bit harder, is detrimental to his progression at the highest level. Nothing would motivate him more than seeing Anthony Martial bag a couple of goals at the weekend.

The midfield used by Mourinho in recent weeks has been clunky to say the least, moving around like an 18th century ship at times.

Moving Pogba further forward – like Mourinho did in the same fixture last season – while leaving Fred and Andreas Pereira behind to orchestrate play would surely serve as an upgrade.