Marcus Rashford and Luke Shaw have both kept their places in the England side for upcoming internationals against Spain and Croatia this month.

The pair combined beautifully to score against Spain at Wembley back in September but Shaw was unfortunately injured in the second half, missing the 1-0 win over Switzerland during which Rashford netted the only goal.

Jesse Lingard is out with an unspecified injury, while Phil Jones has lost his place having failed to cement a starting spot under Jose Mourinho so far this season.

But Rashford and Shaw – both of whom have been impressive since the last international break despite Manchester United’s crisis – will get another chance to impress under Gareth Southgate against high-profile opponents. 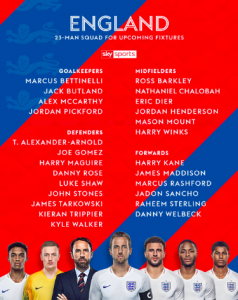