Home » Photo: Jesse Lingard back in the gym as he steps up recovery process

Photo: Jesse Lingard back in the gym as he steps up recovery process

Jesse Lingard has returned to work in the gym as he steps up his recovery from a groin strain sustained last month.

The 25-year-old, who played a crucial role for England at the World Cup, came off during the League Cup defeat to Derby County and has not featured since.

His absence from the team in recent weeks has paved the way for both Marcus Rashford and Anthony Martial to show their worth against Valencia and Newcastle United respectively.

But Lingard has posted a typically hilarious Instagram video showing him putting in the hard yards at the gym at Carrington as he targets a quick return after the international break. 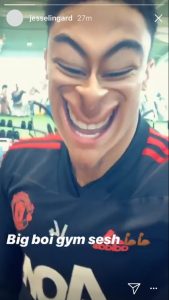 Lingard made a total of 48 appearances for Manchester United last season – 30 of which being starts – ahead of playing six games for England at an emotionally and physically sapping World Cup finals, going deep into extra time twice.

And he was then more or less straight back into the Man United team again, coming on from the bench against Brighton ahead of starting in clashes with Tottenham Hotspur, Burnley, Watford and then Derby.

It would be therefore fair to suggest that Lingard, over the last year, has been subjected to a punishing workload. Mourinho will need to ease him back in.