Manchester United have just one Premier League win at Stamford Bridge since 2002, making the West London side their worst bogey team away from home by some distance.

And with Chelsea currently unbeaten under Maurizio Sarri and Man United heading inexorably backwards under Jose Mourinho, supporters have a right to feel downright fearful of this weekend’s visit.

The worst thing United could do against this fast-moving Chelsea team is play at a slow tempo and invite pressure like they did against West Ham United. That would reap tumultuous results.

With that in mind, here is how United could line up for the trip to Stamford Bridge on Saturday. 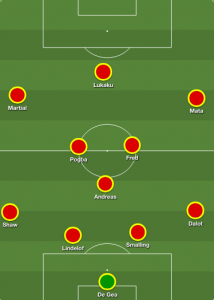 Nemanja Matic has looked out of sorts since recovering from his operation over the summer and missed the international break through injury. Even if he is fit on Saturday, Mourinho needs somebody with greater efficiency and precision at close quarters against Chelsea’s high pressing midfield, which should pave the way for Andreas Pereira to get a start. The Brazilian will be more familiar with Sarri’s emphasis on building up the pitch through triangles having played in Spain for two years.

Another key to stopping this Chelsea team is intense pressure from out wide. Both full-backs cannot afford to let Chelsea pin the defence back early on in the game. This is why the pair of Diogo Dalot and Luke Shaw, who excelled together against Young Boys, should be preferred to Ashley Young and Antonio Valencia.