Romelu Lukaku has now gone eight games without a goal and most Manchester United supporters, following a dismal 0-1 defeat to Juventus, would agree that some change is needed.

Jose Mourinho‘s men lacked urgency or even a sense of togetherness going forward against Juventus, failing to create a clear-cut chance in the box.

Perhaps dispensing with Lukaku, who has not scored at home since March, would give the team a fresh angle from which to cause Everton problems on Sunday.

With that in mind, here is how Mourinho could line up at Old Trafford without the Belgian on the pitch. 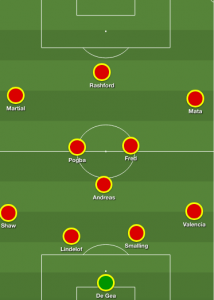 Lukaku has failed to offer urgency at the masthead of attack in recent weeks and it has, consequently, made United’s attacks far too predictable. That is what happens when you play week in, week out, without fail.

Placing the more fluid Marcus Rashford up top, with Juan Mata and Anthony Martial playing closer to him, would give United’s attack a different dimension.

And with Fred restored to the lineup in midfield, adding some desperately needed efficiency on the ball in tight areas, Paul Pogba can have license to maraud up the pitch and provide an aerial threat in Lukaku’s absence.

When you only have two home wins by late October, making drastic changes seems sensible.