Manchester United desperately need a return to winning aways against Everton in the Premier League this weekend.

Jose Mourinho‘s men have raised spirits by beating Newcastle and performing bravely against Chelsea, but the fact remains that they have just one win from seven games.

The manager confirmed during Friday’s press conference that Alexis Sanchez, Diogo Dalot, Marouane Fellaini and Marcos Rojo were all still injured, adding that Jesse Lingard had a chance of returning.

With that in mind, here is who we think Mourinho will start for the game on Sunday afternoon. 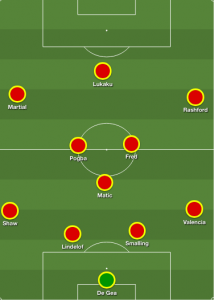 The 55-year-old made it clear in his press conference that, with no other options available, Romelu Lukaku would start against his former club amid a difficult dry patch of eight games without a goal.

Marcus Rashford and Anthony Martial are likely to get another pair of starts with others injured, while Juan Mata is likely to be left out as Mourinho reverts to a midfield three, hopefully giving new signing Fred a much needed opportunity. Antonio Valencia comes back into the side after eye surgery kept him out for ten days, taking the place of Ashley Young, who started against both Chelsea and Juventus.