Anthony Martial and Victor Lindelof have been handed places in Garth Crooks’ BBC ‘Team of the Week’ following their performances during Manchester United’s 2-1 win over Everton on Sunday.

Martial was once again star of the show, winning a penalty in a dazzling first half, which Paul Pogba scored from, before scoring a sumptuous goal soon after half time.

Lindelof, on the other hand, enjoyed yet another composed, solid defensive display at the back, rarely looking out of position alongside Chris Smalling.

The pair were duly awarded with spots on Crooks’ ‘Team of the Week’. 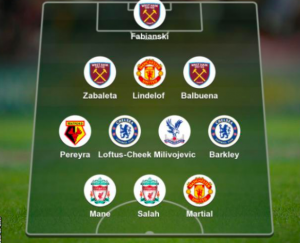 Martial deserves to grab the headlines because he is, to the joy of those who always believed in him, becoming United’s main man in the absence of Alexis Sanchez, playing with irresistible skill and ferocity on the left hand side. It is always a good thing when your best finisher is in good form.

Just as important, though, are the recent performances of Lindelof. With Smalling next to him, the Swede has quietly but assuredly grown in stature at the back, his grasp of the pace and physical nature of Premier League football becoming more refined each week.

Mourinho commended his performance against Chelsea, while supporters everywhere noticed his wonderfully accomplished display against Chelsea. Lindelof’s showing against Everton confirmed that, after about a year, he is starting to look at home in a United shirt.