This season, however, has seen Lukaku lose his place in the starting XI following a period of nine games without a goal.

And with Matic likewise looking off the pace in recent times, perhaps Mourinho needs to consider dispensing with another guaranteed starter against AFC Bournemouth.

With that in mind, here is how Man United can line up on Saturday without Matic in the starting XI. 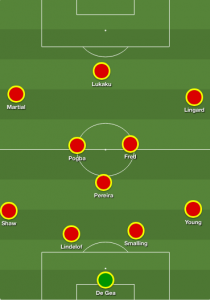 Mourinho ostensibly uses Matic for his physicality, reliability and general defensive cover, but at the moment the Serb is hardly offering any of those qualities to the team.

He looks off the pace with and without the ball, often overpowered by the pace of opponents and unable to exert any meaningful defensive solidity in a team which is currently leaking goals.

At a time like this, when fresh ideas are needed, perhaps Mourinho would be wise to insert the more forward-looking, technically sound influence of Andreas Pereira, who has impressed at the base of midfield under the 55-year-old at points since the summer.

That said, Pereira has hardly received a genuine chance to impress, with Matic relentlessly occupying that role since August. He deserves a chance to stake his own claim for that spot.