Jose Mourinho was keen to stress that Ander Herrera was the decisive factor in laying the platform for Manchester United’s late winner against AFC Bournemouth over the weekend.

The Spaniard, brought on ten minutes into the second half to replace Fred, changed Man United’s tempo and hold on the game with his energetic presence in the middle.

And you suspect that, with trips to Juventus and Manchester City coming up, Mourinho will place even greater emphasis on the influence of Herrera at the base of midfield.

With that in mind, here is how United could line up against Juventus with the tenacious 29-year-old replacing the tired-looking Nemanja Matic. 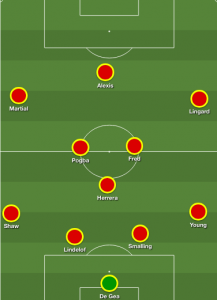 Perhaps Mourinho was saving Herrera – who returned from injury two weeks ago – for these next two games specifically.

United are going up against possibly the two best sides in Europe on their own patch in the space of five days and, as such, will need to bring muscle and grit to each occasion to have a fighting chance.

Herrera is central to that. He is a big game player, somebody whose stature grows concomitantly with the occasion at hand, and he will engender a sense of urgency that United have at times missed with just Paul Pogba and Matic.