Manchester United’s famous win away to Juventus in the Champions League on Wednesday was the best way to prepare for an even bigger game this weekend – the Manchester derby.

Jose Mourinho‘s men, just like they did in Turin, came back from behind to beat Manchester City in April, depriving them of a once-in-a-lifetime chance to win the league in front of their neighbours.

Man United will need to perform with the same vigour and discipline they showed in Italy – and then a bit more – to get a result against a Man City team which has scored 12 goals in its last two games.

Here is how Mourinho could set up his team for the Manchester derby at the Ethiad this Sunday. 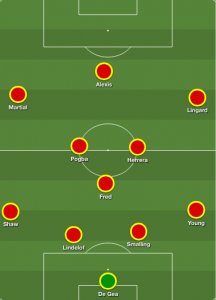 Mourinho may well decide to name a totally unchanged lineup, and he should certainly keep the back four the same given how well they worked together against Juventus.

That front three should likewise be allowed to inflict some damage on the break, with Ander Herrera‘s presence affording Paul Pogba the chance to come forward and command a presence in the box.

Perhaps the only change, in that case, should be to swap out the fatigued looking Nemanja Matic at the base of midfield and use Fred instead. Guardiola’s side will move the ball quicker and the game, on the whole, will develop much faster than it did against Juventus.

And Matic, at the moment, is not looking sharp enough on the ball for that kind of test. Fred was brought in to exhibit his close control and skill in tight areas in games like these. Now feels like the time for him to announce himself as a Man United player.