Jose Mourinho is likely to field exactly the same team which triumphed away at Juventus for his side’s trip to the Ethiad to play Manchester City on Sunday.

The 55-year-old’s side defended as a unit and maintained their cool in the face of a Juventus onslaught before Juan Mata and Marouane Fellaini came on and won the game for Manchester United.

Very rarely has Mourinho been able to field the same team in successive games, such has been the chaos of his time at Old Trafford, but he finds himself in this moment with a team which feels united on the pitch, growing with each passing game.

Here is how we think the boss will line up against Pep Guardiola’s men on Sunday. 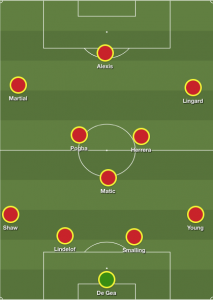 The raw pace of that front three promises to be vital against a team which will dominate the ball. Mourinho’s emphasis will have to be on creating quick, faultless avenues through which United spring from midfield to attack.

At the back, Mourinho will have no desire to change anything. Luke Shaw continues to excel, while Victor Lindelof is in his finest ever form since joining Man United in the summer of 2017. They will all need to give a near perfect performance to repeat their heroics of Wednesday.