12 games into the Premier League season and not only are Manchester United in eight place but they’re also statistically far behind their rivals.

The data suggests Jose Mourinho‘s side haven’t been unlucky in their campaign so far and that they are in fact just worse in their play.

Attacking wise they’ve been outscored by Manchester City, Liverpool and Chelsea with only Tottenham netting the same 20 goals.

Spurs’ defence though has more than made up for the lack of efficiency in front of the goal by conceding less than half of United’s 21 at 10 goals.

Even then they’re still leaky in comparison to Liverpool and City’s five in 12 Premier League games so far this campaign. 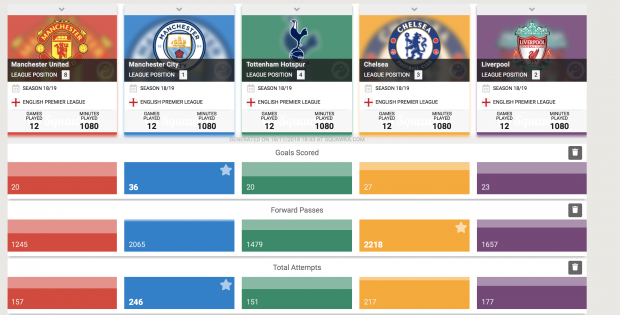 The Red Devils also fall short when it comes to their chances created and total attempts taken with yet again Tottenham the only ones in a similar range.

Mauricio Pochettino’s men still find themselves in the more acceptable position of fourth despite hardly matching Mourinho’s spending the past few years.

In terms of forward passes, Manchester United are far behind any of the aforementioned four which explains their blunt attack in comparison to City.

However, in comparison to the rest of the four, it’s actually just Jose’s defence that has so heavily costed him in his third season in charge so it makes sense it was an issue he desperately wanted to address last summer.