Manchester United make a return to Old Trafford for the first time in almost a month for a Premier League with Crystal Palace on Saturday.

Jose Mourinho‘s men desperately need three points after a comprehensive defeat at the Ethiad prior to the international break left them in eighth position.

The 55-year-old faces something of a selection headache: Luke Shaw is suspended, while Marouane Fellaini, Victor Lindelof, Anthony Martial, Marcus Rashford and Romelu Lukaku are all injury doubts.

With that in mind, here is how Man United can line up against Roy Hodgson’s side this weekend. 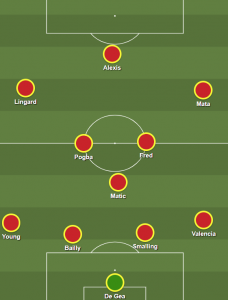 Mourinho will no doubt feel a measure of anxiety at having limited options to choose from for this game. Over the last few weeks he has slowly arrived at a preferred starting XI. He will have no choice but to change it against Palace.

One upshot of that could be Fred, who only has four starts since the end of August, receiving a much-needed run-out in the Premier League having impressed in United’s last home game, a 2-1 win over Everton.

Antonio Valencia, meanwhile, is expected to make a return to the side for the first time since October 2, with Ashley Young filling in at left-back.