Alexis Sanchez and Jesse Lingard both scored for their respective countries – the latter scoring twice – despite only managing one goal between them for Man United all season.

Jose Mourinho will desperately hope the pair, along with the in-form Anthony Martial, can deliver some final product for their club against Crystal Palace on Saturday.

With that in mind, here is a potential starting XI for Saturday’s clash with Roy Hodgson’s team. 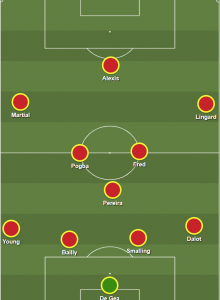 The misfiring Romelu Lukaku looks unlikely to recover appropriate fitness in time for Saturday, giving Sanchez – benched against Manchester City – the perfect opportunity to demonstrate some much-needed prowess in the box. This club would benefit tenfold if the Chilean, at some point, were to find his shooting boots in a Man United shirt.

Lingard, on the other hand, has proved decisive for his country over the international break and, having not scored for United so far this season, will be expected by Mourinho to play a leading role going forward.

And then, of course, we have the golden boy: Martial. Six goals in five games. Dangerous whenever he gets the ball. Potentially lethal in these encounters. Supporters will no doubt want to see United players getting the ball to him quickly out on the left.