Manchester United return to Old Trafford for the first time in almost a month for a Premier League clash with Crystal Palace.

Jose Mourinho‘s men find themselves in eighth position having lost 3-1 to Manchester City prior to the international break.

The 55-year-old faces something of a selection headache: Luke Shaw is suspended, while Romelu Lukaku, Paul Pogba and Marcus Rashford are all injury doubts.

With that in mind, here is how Man United will probably line up on Saturday afternoon. 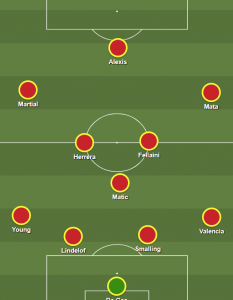 Victor Lindelof, Marouane Fellaini and Anthony Martial were all named as doubts for this game over the international break but their presence at Carrington for training this week suggests Mourinho will look to count on them.

Supporters will desperately want to see Martial, now with six goals in five games, continue his excellent streak of form down the left hand side.

It will be a very different performance without Paul Pogba. The presence of Fellaini instead may well precipitate a more direct, physical approach from United.

Mourinho should aim to get the ball up the pitch early and into the feet of Alexis Sanchez, Juan Mata and Martial to pin Palace back early on. They will need to be patient against a Palace team which will defend in numbers.