Jose Mourinho would have despaired at seeing Victor Lindelof suffer an injury which threatens to keep him out for a month against Crystal Palace last weekend.

The Swede was beginning to form a consistent centre-back partnership with Chris Smalling – something rarely seen since the days of Sir Alex Ferguson.

He will need to now come up with a new defensive formula at a time when Manchester United are leaking goals against any kind of opposition.

With that in mind, here is how Mourinho could line up for Saturday’s trip to Southampton in the Premier League. 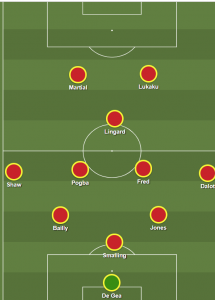 Eric Bailly is still considered by many supporters to be the club’s best defender, yet the Ivorian only has one Premier League start since August.

Mourinho, it seems, does not trust him, but he will need to over the next few weeks.

Perhaps the best formula, then, is to avoid the tension of a traditional defensive pair attempting to work together and instead allow Bailly and Phil Jones – who impressed against Young Boys – to form part of a more positional, systematic defensive structure. Namely, three at the back.

This would, at the same time, give Luke Shaw and new signing Diogo Dalot the chance to offer a different kind of wing play compared with what Ashley Young and Antonio Valencia bring to the table.

The 55-year-old must be aware of how frail his back four has been this season. Some kind of fundamental change needs to occur.