Jose Mourinho has confirmed Diogo Dalot will make his Premier League debut against Southampton on Saturday.

The 55-year-old likewise added that Alexis Sanchez had sustained an “aggressive muscular injury” in training which would keep him out for six weeks.

Injury to the Chilean, coupled with Marcus Rashford‘s misfiring performance at No.9 on Tuesday, means Romelu Lukaku will get a chance to end his goal drought against the Saints.

Here is how we think Mourinho will line up for the meeting with Mark Hughes’ side. 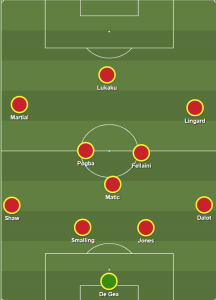 There are good and bad aspects to this team. Dalot and Luke Shaw playing together as wing-backs is deeply exciting – not only because it serves as a massive upgrade but also since it nods keenly towards a brighter future.

On the flip-side, Mourinho will very likely pick Nemanja Matic once again, despite the Serbian looking in desperate need of a rest. Accompanying him will be Paul Pogba, restored to the starting XI after sitting on the bench during the week, and Marouane Fellaini, who scored a vital goal against Young Boys.

Further forward, Lukaku will be aching to score his first goal in over 1,000 minutes, while Jesse Lingard and Anthony Martial look to cause damage from the flanks.