Jose Mourinho was notably tight lipped about Manchester United’s injury situation ahead of his side’s clash with Arsenal – which was, you suspect, just another way of saying he had something of a crisis.

When asked if he could shed further light on the injury situation, Mourinho said: “No. I don’t want to update you, Arsenal TV to make the same questions but they don’t they hide everything from the inside, so why should I answer to you so why should I give anything to you.”

And so, with no help whatsoever from the boss, here is who we think will start against Unai Emery’s side on Wednesday night. 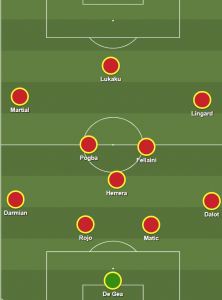 Mourinho will have to rely on somebody to play through injury, or rather hope that somebody recovers in enough time.

In the spirit of the times, we are expecting the worst. Marcos Rojo was on the bench against Southampton and looks likely to make his return against a side who he impressed against in a similar fixture in 2015. Nemanja Matic, of course, will also play.

Mourinho needs somebody to fill the left hand side. Shaw and Young are out, Valencia has no left foot, and the 55-year-old will be reluctant to give new signing Diogo Dalot his first Premier League start playing in an unnatural position.